‘The Talk’ With Mom and Dad -Wall Street Journal reports!!!

This is another great article by the Wall Street Journal’s Sue Shellenbarger (see below)!!!  The business approach is absolutely a great way to get everyone involved and really make the decisions together! We find that with technologies, this is often a great way to approach the situation as well. When we have a family that is considering installing the GrandCare technology (sometimes, the family members say if a Loved One agrees to adopt some sort of remote wellness technology like GrandCare, they will have the assurance and peace of mind to let them stay at home). If a Loved One is engaged and part of that process, it can be a very connected and family-oriented solution! Of course, as the author mentions – if a Loved One is incapable of making this decision (dementia or other mental troubles) that would change the decision process altogether. Often times, I think there is no ONE correct solution, instead there are many puzzle pieces that fit together to provide the perfect in-home solution.  With the new technologies out there, it has added a new “step” into the continuum of care. The new phase can be thought of as enabling technologies. GrandCare, like many others, absolutely requires a human caregiver in order to properly function. Much like a baby monitor, if nobody is on the other end, it really does no good.

GrandCare technology is a tool designed to help caregivers make better informed decisions, connect with their loved ones (by video chatting, sending pictures, videos, music, games, trivia, etc.), and have “peace of mind” that a loved one is safe, happy and healthy at home. I believe that there are many times when an in-home care provider and some type of monitoring technology like GrandCare can be a perfect synergy. GrandCare does not have panning cameras, but instead acts like a customized security system (complete with motion, indoor temperature, lighting, caller-id, door sensors while combining telewellness such as blood pressure, weight, pulseox, glucose, medication dispensers).  There is obviously no one size fits all, but that’s where the customization plays such a huge role! It’s exciting that there are so many options out there – and people can choose exactly what fits their needs.

‘The Talk’ With Mom and Dad

When the time came for Kathy Peel’s mother and father to consider moving into an assisted-living facility, Ms. Peel tried reasoning with them, citing examples of friends who were happy they had made the move. 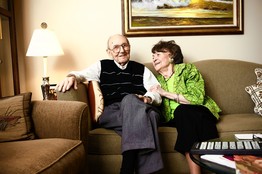 Morris and Kathryn Weeks helped write a ‘strategic plan’ before deciding to move to a senior-living community in Memphis.

When that didn’t work, she took a business approach. Ms. Peel and her husband Bill convened a conference at her parents’ kitchen table in Memphis and helped them write a three-page “strategic plan.” Her parents, Morris and Kathryn Weeks —both retired businesspeople in their late 80s—joined in, talking about their goals and helping list dozens of pros and cons to staying in their home.

Among the pros the family agreed on were the Weeks’ “positive attitude” and desire to share care for each other. But the cons loomed large, including the fact that no family members lived nearby to provide emergency care in a crisis. Ms. Peel had been forced to make 10 trips to Memphis from her home in Dallas in 2009 to help her parents with health problems, from her mother’s heart ailment to her father’s failure to notice her bout with dehydration. Ms. Peel printed the plan, and after mulling it for a few weeks, the Weeks agreed to move to a senior-living community in Memphis.

It’s an agonizing discussion for adult children: whether elderly parents can no longer live on their own. Some 42% of adults between ages 45 and 65 cite the topic as the most difficult one to discuss with their parents, according to a 2006 survey of 1,000 people by Home Instead Inc., an Omaha, Neb., provider of in-home care. And 31% said their biggest communication obstacle is getting stuck in the parent-child roles of the past.

“We take on old family roles,” says Paula Spencer, a senior editor at Caring.com, a caregiving website, and a speaker on elder-care issues. “We don’t want to rock the boat. We’re concerned about parents’ privacy, worried about the consequences, thinking, ‘Maybe Dad will hate me if I move him to assisted living.’ ”

While many seniors do fine at home, others need long-term care facilities or a home aide. It’s good to start such conversations early, says Paul Hogan, chairman of Omaha-based Home Instead Senior Care, which provides in-home caregivers. A good principle is “the 40-70 rule; if you are 40, or your parents are 70, it’s time to start talking,” he says.

Make time to discuss issues without rushing. Research shows adult children who feel hurried during conversations about their parents’ changing care needs may tend to push them toward the most efficient option, such as getting more help or moving to an assisted-living facility prematurely, rather than taking the time to encourage them to work on staying independent as long as possible.

About 70% of people over 65 are expected to need some long-term care services at some point in their lives, such as help with dressing or bathing, in-home services from an aide or nurse, or care in an assisted-living facility, according to 2008 federal data. More than 40% will spend time in a nursing home. While the average time seniors need help is three years, 20% are expected to need long-term care services for more than five years.

Take time to assess a senior’s entire situation before jumping to conclusions about their weaknesses or desires, says Jake Harwood, a professor of communication at the University of Arizona, Tucson. A parent whose husband dies may suddenly seem unable to care for herself, failing to clean the house or keep up with bills. But the bereaved spouse may simply need more contact with friends and social support to get motivated again.

Also, adult children sometimes misunderstand parents’ reluctance to move, says Kenneth Robbins, a clinical professor of psychiatry at the University of Wisconsin in Madison. “They may resist leaving the house because they think their kids and their grandkids are going to miss the house,” or they fear that a close neighbor will be left alone, says Dr. Robbins, who is also a senior medical editor at Caring.com. Seniors also may fear having to leave cherished belongings behind or being unable to make friends in a new setting. And some see leaving their homes as an acknowledgment of their increasingly frailty—and mortality.

Robin Joy, of San Francisco, says she helped her widowed mother Gail, 77, hire a professional organizer after figuring out that cleaning out the family’s Evanston, Ill., home of 30 years was an obstacle to her moving. Gail says she put her name on a retirement home’s waiting list, but passed up a couple of opportunities to move in because the need to sort through all the papers and belongings “seemed overwhelming.”

The organizer has since helped Gail get stacks of papers and stuff under control, and she is planning to move soon.

Dementia, of course, raises added issues. People with dementia may “no longer be able to make decisions in their own best interests, and they begin to misinterpret what other people are trying to do for them,” Dr. Robbins says. Seniors with dementia may become paranoid, depressed, or so confused that “life becomes a minefield of dangers,” he says.

Appealing to a parent’s values can help in such cases. Barbara Meltzer of West Hollywood, Calif., says that when her father died several years ago, her aged mother, who was living in Florida and had dementia, resisted Ms. Meltzer’s plea to bring in a home health aide. The aide “would call and say, ‘Your mother sent me home,’ ” Ms. Meltzer says.

So she turned the conversation with her mother to, “Please do it for me, Mom, because I’m worried about you.” She also mentioned to her mother that allowing the aide to stay helped her by providing a job. “That worked, because my mother was a giver. She was Mother Earth. With her, it was always about helping somebody else,” Ms. Meltzer says.

Eventually, she used the same approach to persuade her mother to move to California to live near her and other family members. “We love you so much and it’s important to us that you’re here,” Ms. Meltzer says she told her. Her mother lived nearby for several years before dying last year at the age of 93.

Meanwhile, Kathy Peel’s parents have moved into Town Village at Audubon Park, an independent senior living community in Memphis. The pros and cons in the plan they compiled with Ms. Peel and her husband have proven true. Ms. Peel travels often to see them, and the Weeks are considering moving again in the future, to Dallas, to make it easier for the Peels to help them out. “They have realized they really do need us,” Ms. Peel says.